At Atlanta Cardiology Consultants, you will find one
of the most comprehensive cardiology practices in all
of Atlanta. Our offices are equipped with the most
advanced, cutting edge technology available today.

Our goal is to provide you with
state-of-the-art cardiovascular care in
an informative, friendly and caring
environment, supported by
cutting-edge technology.
Home Our Services Heart Monitors

Monitors - What are Holter, Event and Transtelephonic Monitors? Do they hurt or are they harmful?

The Holter monitor, event monitor and transtelephonic monitors do not hurt.  They do not cause any harm because they are recording devices, and they do not send out electricity.

The ILR requires a small surgical incision that causes minimal discomfort for a few days. After that, there is no pain.

Is there anything else to know about these devices?

The Holter, event and transtelephonic monitors cannot get wet or they will become damaged. The ILR is protected by the skin so bathing and swimming with an ILR is fine after the wound has healed. The ILR will need to be removed when it is no longer needed. This is usually when the reason for the infrequent symptoms has been determined.

The Holter monitor, invented by Dr. Norman Holter, is a device that records the heart rhythm continuously for 24 hours.  This means that it records each and every heart beat over that time period.  Sticky patches (electrodes) on the chest are connected to wires from the Holter monitor.

The monitor is carried with the patient for the recording period, usually 24 hours. The heart rhythm is recorded onto a cassette tape or flash card technology and then processed at a heart center.  From this recording, a wide variety of information can be obtained, including heart rates during day and night, abnormal heart beats, and changes in heart rhythm during any symptoms.   A diary comes with the Holter for the patient or caregiver to write down the time and type of symptoms felt so the rhythm can be reviewed.

Figure 1. shows Holter monitor with four leads and solid state recording.  Other monitors may have up to seven leads and run on cassette tapes. 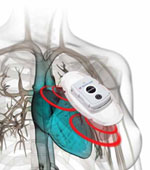 Event monitors are small devices that are used by patients over a longer period (weeks to months, typically one month).  Two sticky patches (electrodes) on the chest connect two wires to the event recorder.  The monitor is always on but will only store the patient’s rhythm when the patient or caregiver pushes the button.

Once a recording (sometimes more than one) has been made, it can be transmitted over the phone back to your heart center.

Figure 2. show an Event monitor with leads.  Some devices will store more than one event.

These small devices transmit the patient’s rhythm live over the phone.  An example is shown in Figure 3.  These devices do not save a recording of rhythm for later playback like an event monitor.  The transtelephonic devices are commonly used by pacemaker/ICD patients for routine scheduled checks over the phone.  (An ICD is an implantable cardioverter-defibrillator or shock device used for treating life-threatening rhythm problems.)

Figure 3. Transtelephonic monitor used with pacemaker patients.  Each wristband is a lead that is worn by the patient during transmission of the rhythm.  The white round magnet is used by some pacemaker patients to transmit specific data about the pacemaker.